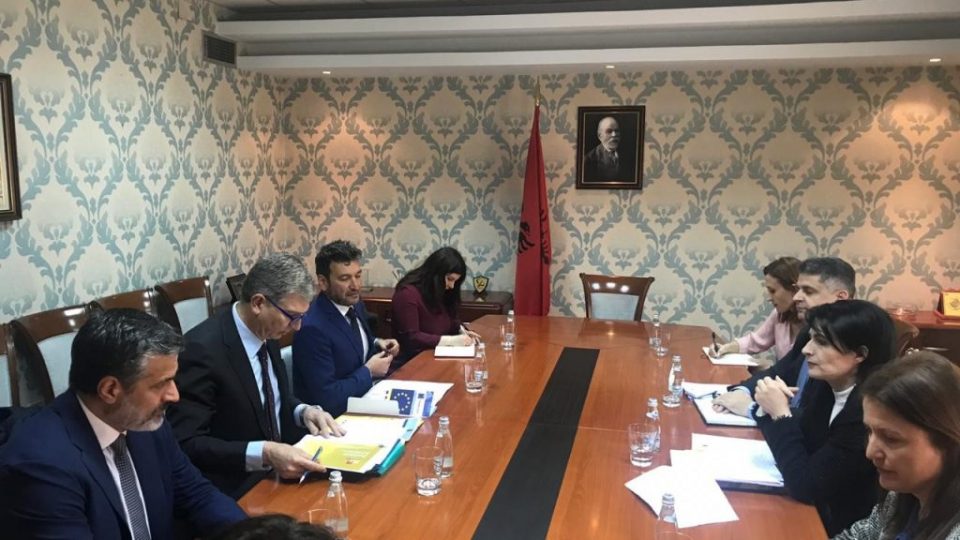 In implementation of one of the primary objectives of PAMECA V, which aims to promote the strengthening of international judicial cooperation of beneficiary institutions with one or more EU member states in the fight against organized crime and terrorism, PAMECA V invited Mr Filippo Spiezia, Vice President of Eurojust for a round of official visits with Albanian General Prosecutor, Head of Prosecutorial Council and Head of Serious Crimes Prosecution Office.

Following the signature of the Agreement with Eurojust on 5 October 2018, the purpose of Mr Filippo Spiezia’s visit was to encourage Albanian institutions to take the necessary steps for the ratification of the cooperation agreement by December 2019, appointment by the GPO of an Albanian contact point at Eurojust whose role is to facilitate the judicial cooperation processes as well as appointment by the HPC of an Albanian Liaison Magistrate at Eurojust who shall have a full legal status as a prosecutor.

During the meeting with General Prosecutor of the Republic Mrs Arta Marku, Mr Spiezia dwelled upon the reformation at Eurojust and explained that the new legal basis – the Eurojust Regulation of 2018, has reinforced and improved its operational capability. Mr Spiezia made an invitation to visit Eurojust and to conduct a working meeting in relation to the role of the Albanian focal point and pointed out the importance of the role of General Prosecutor in implementation of the Cooperation Agreement.  Mrs Marku informed that the new focal point at Eurojust will be Mr Adnan Xholi and expressed her commitment to facilitate MLA requests as well as cooperation with Eurojust.

During the meeting with Mr Gent Ibrahimi, Head of High Prosecutorial Council, Mr Spiezia remarked that the expectation of Eurojust is that in implementation of the Agreement, Albania seconds a Liaison Prosecutor, in order to facilitate the cooperation between Albania and Eurojust. Mr Ibrahimi expressed his readiness to comply with the requirements of the agreement and committed himself to meet the end-of-year deadline for this appointment and requested the assistance of PAMECA V for drafting the relevant documentation for the definition of the legal status of the said prosecutor.

During the Meeting with Mrs Donika Prela, Head of Serious Crimes Prosecution Office, the focus of discussions were the joint investigative teams. Ms Prela made a short expose of the satisfactory results of JITs and pointed out that Albania has established such investigative teams only with Italy. In this regard, Mr Spiezia proposed that a template agreement of cooperation is drafted with the assistance of PAMECA, building upon and exploiting the experience that Albania already has with Italy. This template agreement will then be proposed to the Eurojust representatives.

The General Prosecutor, Mrs Marku,  Head of Prosecutorial Council Mr Ibrahimi,  Head of Serious Crimes Prosecution Office Mrs Prela and Mr Spezia expressed to each other the commitment to collaborate in order  to give a new impetus and dimension to  organised crime and other serious crimes investigations with other EU members states under the umbrella of EUROJUST.

PAMECA V will follow up on the outcome of these meetings by drafting specific sub-activities during the next workplan.