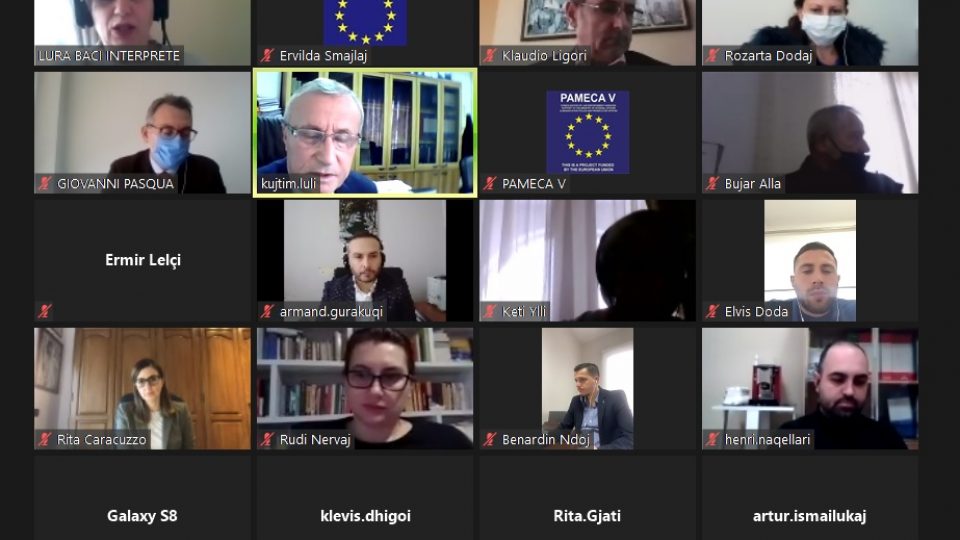 PAMECA V in close cooperation with Albanian General Prosecution Office and the Italian High Judicial Council Technical Assistance replicated the second round of the online training on duty-related offences. The training was held on the 14th and 15th of January 2021 and it was attended by 76 representatives of Prosecution Office, State Police, SIAC and other law enforcement agencies, suchlike HIDAACI, Albanian FIU, Tax and Customs Office, SIAC. This training was held in the framework of the Memoranda of Understanding signed between General Prosecution Office, State Supreme Audit and High Inspectorate of Declaration and Audit of Assets and Conflicts of Interests. The training was co-presented by PAMECA LTE on Organised Crime, Mr Giovanni Pasqua, and the Prosecutor of General Prosecution Office, Mr Kujtim Luli. Mr Pasqua expressed PAMECA Project commitment to assist GPO in such initiatives that aim to increase the efficiency of the investigation of duty-related offences, while Mr Luli provided an overview of the Memorandum of Understanding and the positive impact that it will have in the future.

Albanian Prosecutor, Mr Armand Gurakuqi gave a clear picture on the importance and necessity that law enforcement agencies, suchlike Albanian FIU, ASP,  Tax and Customs Office, HIDAACI, etc should exchange information among them as a condition for the efficiency of investigations against officials who exercise public functions. Ms Esmeralda Cami, member of High Prosecutorial Council, underlined the noteworthiness of indirect evidence in the probatory process.

During the second day of the online training workshop Mr Filippo Romano, representative of Italian Anticorruption Authority, draw attention to the administrative investigations conducted by independent authorities and the need to interact with prosecutors, while Mr Maurizio Mirarchi, representative of Italian State Police, introduced the best practices and challenges to Integrity related issues in Police and Justice Sector.