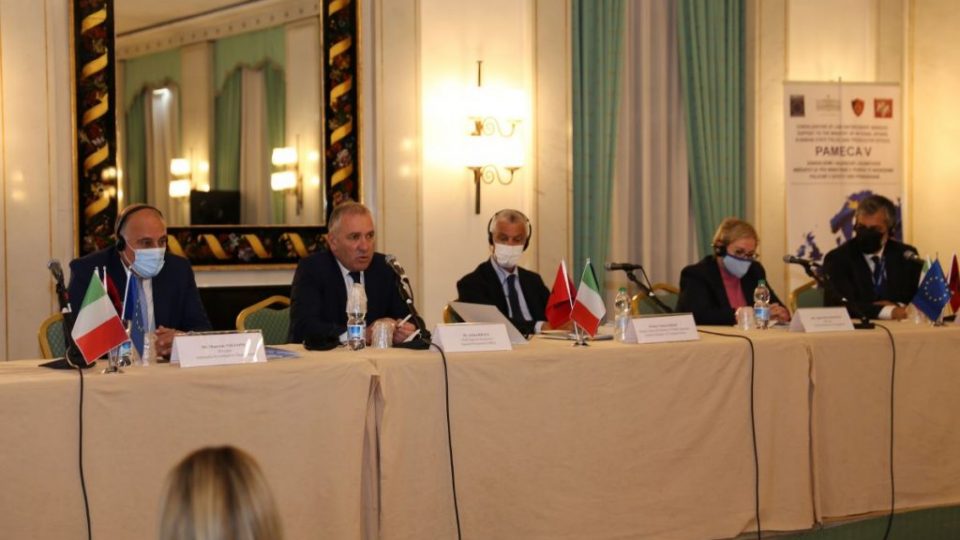 A 5-day operational training for 27 Albanian investigators of the NBI (National Bureau of Investigation), was finalized on 11 June 2021.

The investigators, accompanied during the first day, by Mr Arben Kraja, Head of Special Prosecution Office and Mrs Aida Veizaj (Hajnaj), Director of NBI, were welcomed by the Prefect Vittorio Rizzi – Deputy General Director of Public Security and Central Director of the Criminal Police together with Mr Maurizio Vallone, Director of the DIA.

Both Mr Kraja and Mrs Hajnaj appreciated the initiative and thanked the Italian counterparts and PAMECA V project for organizing this important activity which gives to the Albanian investigators the opportunity to appreciate firsthand the Italian experience in the fight against organized criminal groups, money laundering and high level corruption. Prefect Rizzi during his welcoming remarks extended his commitment for further cooperation, emphasizing the good relation between the two countries. He expressed the willingness to welcome the second group of NBI investigators, once they are selected, to benefit from this experience and further on, he extended an invitation to Mr Kraja to host a training for SPO prosecutors in the area of police techniques – forensic instruments, in order to introduce them to the available technological investigative technologies currently in use.

Mr Vallone congratulated the newly recruited investigators and hoped in a close cooperation between the two offices, offering his support and availability to organize other trainings.

The training, in view of the EU funded project PAMECA V, aims to further enhance the capacities of the newly recruited investigators in terms of best investigation practices. The participants had the opportunity to visits some of the facilities of DIA Department such as the Scientific Police service, the Research Center for Multimedia Information Analysis (CRAIM) and the Postal and Communications Police, alongside the theoretical part of the training on several topics of interest such as: prevention of mafia infiltration into public procurement, asset and money laundering prevention measures, cybercrime etc. Lectures were delivered by senior DIA officials of various Units and Departments. Lectures were delivered by senior DIA officials of various Units and Departments, as well as practical exercises were demonstrated also by the Service for International Police Cooperation on Passenger Information Unit (P.I.U) and Cybercrime. A certificate ceremony was organized the last day of the training, delivered by DIA Director, Mr Vallone, who invited the NBI investigators in other future trainings to give them the possibility to exercise their skills and to see from a closer prospective the work of DIA officials in different units.